Baranyai: Alex Jones and the results of free speech

This part is Presented

This part was produced by the editorial division. The shopper was not given the chance to place restrictions on the content material or evaluation it previous to publication.

Author of the article: 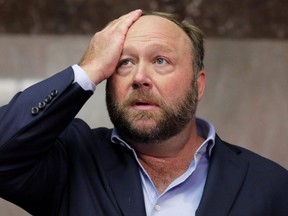 Spare a thought for the financial hardships of Infowars, the personal outrage outlet of conspiracy profiteer Alex Jones.

For more than two decades, Jones’s influential platform has delivered on the promise of its name – waging war on information – spouting a steady stream of extremist paranoia. A sampling of Jones’s rantings: natural disasters are caused by government “weather weapons,” 9/11 was an inside job, and chemicals are being dumped in waterways to turn frogs gay.

Infowars calls itself an “unfiltered news organization.” More accurately, it’s a vehicle for selling supplements and survivalist gear. In early 2020, it claimed to sell a brand of toothpaste that “kills the whole SARS-corona family at point-blank range” (earning a cease-and-desist order from New York Attorney General Letitia James).

Recurring topics on Infowars include the war on free speech, the war on guns, and the war on white people. It’s a simple sales formula: drum up fear and outrage for profit.

Amid recent legal judgments against Jones, the platform filed for bankruptcy protection last Sunday, along with two other companies connected to Jones: IWHealth and Prison Planet TV. Bankruptcy protection may allow the company to keep operating while it restructures, and put pending civil proceedings on hold.

Jones was sued for defamation, for perpetrating one of the most pernicious lies in memory: denying the deaths of 20 first graders and six staff at Sandy Hook elementary school. For years, Jones baselessly insisted the mass shooting was a false flag operation – a hoax staged to claw back gun rights – dismissing the victims as “crisis actors.”

The claim was not only incomprehensibly cruel; it also unleashed a vicious campaign of harassment, by malleable Infowars devotees, against grieving families. Some were forced to move several times as their locations were repeatedly tracked and revealed online. They endured death threats. They were told their children never existed.

When some bereaved parents tried to find purpose in their suffering, through advocacy against assault weapons and online misinformation, Jones’s legal team argued this made them public figures – to increase the burden of proof in their case – even as he eventually conceded their children were, indeed, gunned down.

After spending $10 million on legal costs to fight the families, Jones offered to scrounge up $120,000 per plaintiff, and a “heartfelt apology.” When the families refused his settlement offer, Jones went on the attack, ranting about ambulance chasers.

“The Sandy Hook shootings are almost a decade behind us,” he said in a statement. “It’s time to put this case behind us, too.” The audacity is staggering – as though his actions were not the very reason these families have been unable to put the case behind them – denying a tragedy that has defined their lives, and then augmenting their suffering by making them targets of relentless harassment.

This man has spent years evading responsibility, holding up the First Amendment like some kind of impenetrable shield from consequences. A court has pierced that false armour, finding Jones liable for damages; a trial to determine how much he should pay the families is set for August.

This week, Jones has peppered his show with appeals for followers to buy more merchandise. The agenda behind a “giant payout” is to force him off the air, he suggested, threatening free speech (as opposed to speaking – and lying – freely, and weathering the consequences).

“I need your help to stay on air,” Jones said, peddling limited-edition T-shirts. “We’re in the critical part of the battle now.”

This commercial has not loaded but, however your article continues beneath.

This commercial has not loaded but, however your article continues beneath.

Sign up to receive a curated collection of links and highlights from our award-winning breaking news coverage, in-depth analysis and unmatched investigative features at lunchtime weekdays.

Thanks for signing up!

A welcome email is on its way. If you don’t see it, please check your junk folder.

The subsequent difficulty of LFP Noon News Roundup will quickly be in your inbox.

We encountered a problem signing you up. Please attempt once more

Postmedia is committed to maintaining a lively but civil forum for discussion and encourage all readers to share their views on our articles. Comments may take up to an hour for moderation before appearing on the site. We ask you to keep your comments relevant and respectful. We have enabled email notifications—you will now receive an email if you receive a reply to your comment, there is an update to a comment thread you follow or if a user you follow comments. Visit our Community Guidelines for extra data and particulars on how you can alter your e mail settings.